Peckinpah is in the Details: Junior Bonner

America, if not the world, was in a state of flux in 1972, as the alternative values that had made their presence unequivocally known in the 1960s began to slowly but surely weave themselves into the fabric of daily life. At its most superficial and visible level, this transition was evidenced by the disappearing ears of traditionally conservative types—then called “squares”—as they became increasingly obscured by steadily growing hair . . . with previously nonexistent sideburns keeping pace. On the female side, less was the new more when it came to wearing makeup, and pants were replacing skirts as the norm as closet feminists began pushing their own personal envelopes. New was supplanting old at a rapid pace; generations-old Victorian storefronts and other building exteriors were being hidden like family skeletons behind more simple, modern-looking façades.

Familiar ways of life were receding into the sunset as well, only on a more permanent basis than fleeting haute couture and temporary, cosmetic architectural fixes. The landscape was changing, literally and figuratively. It is this reality that is layed out in the background tableau of Sam Peckinpah’s Junior Bonner, the story of an aging rodeo champion—played by ’sixties icon Steve McQueen in a quietly inspired performance—who is dealing with the dissolution of his family as he continues to age in a young man’s business.

Peckinpah, for all the slow motion violence and carnage he splashed across the screen in his influential and lauded The Wild Bunch, for which he is best remembered today, also had a markedly serene, bucolic side. This undercurrent of tranquility showed itself in the spiritual high road he took in Ride the High Country, a sadly forgotten 1962 masterpiece, and again in the quirky and personal The Ballad of Cable Hogue (1970). It is revealed in all its pastoral, pensive glory in Junior Bonner. In this starkly scintillating, reflective film, scripted by Jeb Rosebrook, Peckinpah’s camera records the world of the American Southwest of the early 1970s in a strikingly realistic manner, often using local folk from the Prescott, Arizona filming location as actors, and incorporating an actual Fourth of July parade that took place during shooting.

Junior’s father, Ace, a former rodeo champion himself and a local hero in Prescott, is basically a sixty-something boy who refuses to grow up, drinking in the residual adoration of the community with the same gusto one imagines he did in his prime. Yet his world and his family are deteriorating under his nose; his home has been bulldozed to make way for a trailer park that’s being developed by his other son, Curly, and he and his wife have long since parted ways, thanks to his cavalier improprieties through the years. Richly played by Robert Preston with his usual charming bravado, Ace is for all practical purposes an older version of Professor Harold Hill, the character he had immortalized ten years earlier in the film version of The Music Man, which Peckinpah admired.

Junior’s ostensible Moby Dick is a bull named Sunshine, a nemesis which earlier—revealed in snippets of flashback—prevented him from winning a bulldogging competition, and which appears to be the device that drives the plot forward. Reading between the lines, one can surmise that Junior sees a successful repeat ride on Sunshine as a way of maintaining his hometown hero status, as well as staving off the encroaching end of his rodeo career—and a perhaps inevitable descent into his father’s irresponsible lifestyle. Yet the denouement occurs almost as a throwaway; Ace and his estranged wife (Ida Lupino) are enjoying one last hurrah together before Ace leaves for good for Australia, and Junior’s real estate developer brother (Joe Don Baker), himself an instrument of change, is off somewhere else as well. It is in the alternately rapid fire/invisible editing by Frank Santillo and Robert L. Wolfe that Peckinpah’s theme is revealed: an America in transition, as old ways and traditions become things of the past.

One could come to the same conclusion about this very type of “slice of life” filmmaking. Junior Bonner appeared at a time when Peckinpah was at the height of his creative powers and commercial American cinema as an art form had reached a level that has long since slipped from its grasp. There’s a grittiness and a soulful realism inherent in Bonner that all but disappeared from Hollywood movies in the wake of Star Wars that only shows up any more in independent films. The world-in-transition theme is even evident in the casting, McQueen representing the then-new, grittier Hollywood of 1972, Preston and Lupino the old Hollywood of the studio system years.

In Bonner, Peckinpah is consumed with the details of the life the film portrays: the inner workings of the rodeo (down to the latches on the chutes) and its accompanying carnival atmosphere, the pre-competition rituals of the cowboys, the faces in the crowd, the hot dog vendors in the grandstand, the blowing off of steam in the local watering hole. He indulges in breakneck editing when it is called for, and slow motion, non-chronological montages of the rodeo contestants participating in the various events. From this highly disciplined yet seemingly spontaneous attention to detail the bigger picture forms. 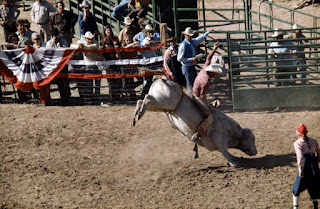 Through it all, the director takes his time telling his story. There’s a long, wonderful scene in which Junior sits with Ace on a bench outside a train station after they’ve broken away from the parade in which they had been riding on horseback—the first time in years that father and son have been alone together—and the pace slows as they sit and talk. At one point, when Ace has stalked off across the tracks in mid-conversation, a train passes between the two men, giving Junior a few seconds to register the pain he is feeling without his father seeing it. It’s a tremendous moment of acting by McQueen, and a bold move by Peckinpah, which adds to the understated richness of the film.

Junior Bonner wasn’t a hit (“I made a film where nobody got shot and nobody went to see it,” Peckinpah said). One would come later that year with The Getaway, also starring McQueen, along with Ali MacGraw, which ranked among the top ten grossing pictures of 1972.  Following that came the troubled production of Pat Garrett and Billy the Kid in 1973, which was eventually released in an incoherently truncated form by MGM.* McQueen would go on to further success, starring in Papillon (1973) and The Towering Inferno (1975).

* A restored “director’s cut” was released to home video in 1988, revealing the film to be one of the finest Westerns of its era.

Watching Junior Bonner forty years after its release, there’s an uncannily tangible sense that one is viewing something very real—a tribute to Peckinpah’s adeptness at location shooting and penchant for the potential tightrope act of using non-actors as extras effectively. But with that comes an inescapable sense of loss of a particular time and place, as attributable to the fact that the world we see in the film is indeed gone now (along with its pre-CGI style of filmmaking) as to the theme and mood of the film itself.  Then you realize you’ve just witnessed the passing of the last vestiges of the Old West and all that it represented.