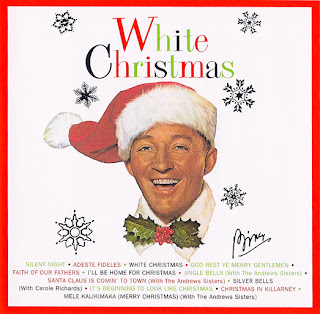 Bing Crosby’s Merry Christmas album has been in print for over six decades—the title was switched to White Christmas a few years ago for its most recent CD incarnation—surviving several changes in format.
It’s a little annoying that, despite his monumental and pioneering achievements in the recording, film, and radio industries, Bing Crosby’s musical legacy has become more or less restricted to the genre of Christmas music, at least from the perspective of the general public. But let’s face it, nobody does Christmas better than Bing. Admit it—the holidays just don’t feel like the holidays unless you’ve heard Bing croon “White Christmas” at least once. The fact is, anyone who’s ever recorded a secular Holiday song since World War II—from Perry Como and Johnny Mathis right up through Josh Groban and Michael Bublé—owes a debt to Mr. Crosby. And it all began with the White Christmas album.

Actually, Merry Christmas was its original title, and it was first released in the form of a multiple 78-rpm record set in 1945, later making the transition to a box set of 45s, then a 33 1/3-rpm LP (with four additional songs). It eventually became the very first million-selling Christmas album, and as recently as December 2010 the White Christmas CD topped Amazon.com’s Pop Vocal Holiday Music, Classic Broadway Vocalists, and Nostalgia Music charts simultaneously. What other album do you know of that has even been in print for over sixty-five years, let alone is still topping sales charts? 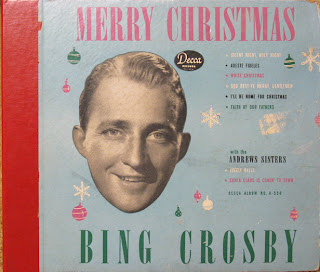 The album that started it all.

Bing’s 1935 recording of “Silent Night” (his ’47 version is included in this collection) was, in fact, the first Christmas record to become a huge hit. Ironically, Bing had been reluctant to record a religious song for the purpose of commercial gain, and he only agreed to do it if the proceeds went to a Catholic charity.

Irving Berlin's “White Christmas,” on the other hand, was not only the first secular holiday tune to do well on the charts, Bing’s rendition of it ultimately became the biggest selling record of all time*, and it opened the floodgates to a deluge of annual postwar Holiday recordings by major artists that continues to this day. The recording’s initial success was attributed to its striking a chord with homesick GIs in the sweltering Pacific Theatre of Operations during the Second World War, but that somehow spilled over onto the home front and continued long after the troops had returned. So much so that it cracked the Billboard pop charts an amazing twenty separate times over the ensuing couple of decades and reached the #1 position in three different years (1942, ’45, and ’46)!

* Current estimates have it at over 50 million units sold, and that number increases annually with a high volume of digital downloads during the holiday season.

Holiday novelty songs are still a part of our world, and “Christmas In Killarney” and “Mele Kalikimaka” have to be categorized as such—or are they an Irish tune and a Hawaiian tune, respectively? Either way, they’re so darned warm and infectious one can't imagine this collection without them. Another one of my favorites is “It’s Beginning To Look a Lot Like Christmas,” which unfailingly elicits an almost Pavlovian reaction of childlike anticipation of the Yuletide season every fall when it first wafts, post-Halloween, through the prematurely-decked malls.

For my money, “I’ll Be Home For Christmas” is the real gem of this set. Could the troops stationed overseas have felt any less wistful upon hearing this breathtaking recording in the winter of 1943 than they had with “White Christmas” the year before? Bing’s voice floats flawlessly, hauntingly, over the opening guitar strains as we’re drawn, for a few fleeting moments suspended in time, into a pensive, somewhat melancholy realm . . . until being lulled gently back to our own time and place on the wings of an exquisitely sustained final note, a warm but mournful glow of remembrances of Christmases past lingering after. Maybe it’s a taste that’s acquired with age, but to me (while acknowledging the obvious sentimentality), this is pop artistry of the highest order, and the perfect marriage of singer and song. Anyone who only remembers the venerable Bing Crosby of the leisurely TV Christmas specials of the 1960s and ‘70s should give this performance a serious listen. 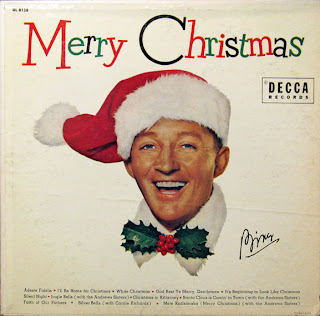 There’s a lot more to enjoy here, particularly Bing’s workout with the inimitable Andrews Sisters on bandleader-arranger Vic Schoen’s jazzed-up version of “Jingle Bells” (recently ripped off, note for note, harmony for harmony, and pause for pause, by Barry Manilow), but I’ll leave the rest for you to discover. Or rediscover, since these songs and carols are all practically a part of our collective unconscious. If they’re not, or if you’re too young to have heard this collection before—well, trust me, it’s essential holiday listening.


And it is, as they say, the perfect stocking stuffer.