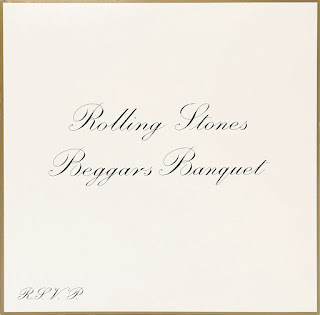 Ye are the salt of the earth: but if the salt have lost his savour, wherewith shall it be salted? It is thenceforth good for nothing, but to be cast out, and to be trodden under foot of men.
—Matthew 5:13

Nineteen sixty-seven had not been kind to the Rolling Stones. Mick Jagger, Keith Richards, and Brian Jones were all arrested on drug charges between February and May, and their year-end LP, Their Satanic Majesties Request—an uncharacteristically trendy foray into psychedelia (hey, everybody was doing it)—was roundly lambasted in the press as an anemic attempt at imitating the Beatles’ game-changing Sgt. Pepper’s Lonely Hearts Club Band, released that summer. Critic Jon Landau, writing for Rolling Stone magazine, called Majesties “an insecure album in which [the Stones] try too hard to prove that they too are innovators, and that they too can say something new. [. . .] The new ideas are presented in such an undeveloped state that they do not achieve a valid identity of their own.” (Today, Majesties doesn't sound all that bad—it was probably just a matter of poor timing that sentenced it to its undeserved but lingering reputation of being the poster child for rock and roll missteps.)

Prior to the drug busts and Satanic Majesties came Between the Buttons, in January—an album that isn’t without its merits (both in its UK and US iterations), but which suffers somewhat from an overall feel of vacillation and irresolution. It’s as though the band self-consciously tried to absorb as many contemporary influences as possible,* but rather than properly digesting and repurposing those sounds in their own Stones-like image, they only slightly reprocessed them, resulting in an album that comes off as a scattershot semi-entity, some aspects of which sound even more dated today than Majesties.

*Especially the Kinks. Oddly, though, other than the (psychedelicized) Bo Diddley-influenced “Please Go Home,” there’s not much trace of the blues or R&B—hitherto their raisons d’être.

As had been the case in 1967, the Stones didn't completely avoid trouble in 1968, a year that is remembered primarily for its violence, assassinations, and political and racial unrest. Their August single, “Street Fighting Man,” was purportedly inspired by an anti-war rally at London's US embassy, in which Jagger had participated, as well as protests in the U.S. that had turned violent, though Keith Richards claimed a couple of years later, “it really is ambiguous as a song.” The 45 was released in the States within a week of the clash between police and protesters outside the Democratic National Convention in Chicago, and, fearing the song might incite further violence, several Chicago radio stations refused to play it. Fueling the flames, the picture sleeve featured a photo of police apparently kicking a fallen demonstrator at a political rally; the sleeve was quickly withdrawn and is now a collector's item.
It wouldn’t be the last time that year that the Stones would have to bend to The Establishment’s perception of propriety. The cover art for their next album, Beggars Banquet, was initially slated to be a photo of a grimy public restroom, complete with toilet, and its graffiti-covered walls. At the behest of the record company, and despite a dispute from the Stones, the released cover would instead end up being a simple white mock banquet invitation.*

*The cover as it was originally intended was finally released on a reissue of the LP in the 1980s, as well as CD releases. 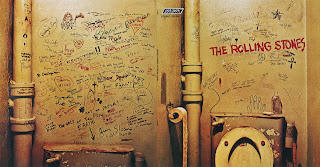 In the spring the Stones had convened at Olympic Studios in London with Jimmy Miller—the producer of their latest single and bona fide rock classic, “Jumpin’ Jack Flash”—in tow to record Beggars Banquet, an album that would herald a return to the blues-rock form from which they had sprung in the early '60s, but with a grittier, more contemporary, world-weary edge. For many, including yours truly, it was with this record that the Stones found their real musical identity and became the force of nature that has ever since come to mind when the name The Rolling Stones is uttered. As Banquet recording engineer Glyn Johns put it, the album marked the Stones’ “coming of age . . . I think that the material was far better than anything they’d ever done before.” If the Beatles were reborn with the release of Sgt. Pepper, the Stones were also with the release of Beggars Banquet. It transformed them from a great singles band (and, IMHO, a merely above average cover band) to a great album band, setting their own course and beholden to no one.

It’s no coincidence that this transformation occurred just as Jimmy Miller entered the Stones’ orbit. Starting with Banquet, he would produce five of their finest albums, four of which—Banquet, Let it Bleed, Sticky Fingers (not entirely produced by Miller, but close enough), and the gold standard for double LPs, Exile on Main St.—are generally counted among the greatest rock albums ever made. They are the four highest ranking Stones LPs on Rolling Stone Magazine’s 2012 list of 500 Greatest Albums of All Time. As Phil Brown, an engineer at Olympic Studios said, “Jimmy Miller was this incredible kind of energy and drive and force. He made the session feel like you wanted to be there and make music. But he wasn’t a hands-on producer. There was more of an overall control, a bit of a vibe” [sic]. 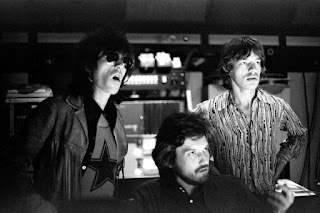 That the ouster from the group of the talented but troubled multi-instrumentalist Brian Jones occurred soon after this burst of rock and roll excellence began probably was just a coincidence. Nevertheless, the arrival of the gifted 20-year-old guitarist from John Mayall & the Bluesbreakers, Mick Taylor—Jones’ replacement—elevated the overall quality of the Stones’ collective performance to a whole new level, and helped transform them into a great live band (and, IMHO, an excellent cover band, particularly when performing Chuck Berry numbers) in 1969, by which time they were fully firing on all cylinders. Beggars Banquet would be the last Stones album released during Jones’ lifetime.

Banquet’s leadoff track, “Sympathy for the Devil,” the recording of which was documented in Jean-Luc Godard’s 1968 film, One Plus One (AKA Sympathy for the Devil), was emblematic of the tumultuous times in which the album was created. It originally included Mick Jagger's line, “I shouted out, ‘Who killed Kennedy?’,” but when Bobby Kennedy was assassinated while the sessions were taking place—from June 4th through June 10th—the lyric was changed to “Who killed the Kennedys?”. The fierce performance (the energetic samba rhythm coming about under producer Miller’s influence) lays the groundwork for the album, yet it gives no hint as to what lies ahead for first time listeners.