It’s a Family Affair: There’s a Riot Goin’ On 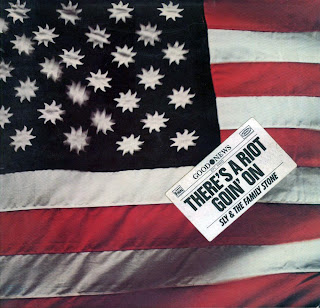 When I was growing up, in the pre-Internet/Wii/Netflix/iPod/satellite era, the main source of entertainment for a small town kid, besides television (only one channel if you had “rabbit ears” like we did, three with a rooftop antenna), was Top 40 radio. It was an airplay format based on the popularity of songs recently released on 45 rpm records, the more popular ones being played more frequently per hour or two than those further down the list. Every major U.S. city had its own Top 40 station, usually on the AM dial, and each city had its own top forty most popular songs, though they weren’t necessarily limited to forty. WLS, the 50,000-watt powerhouse station located in Chicago, for instance, migrated from forty, to thirty, to sometimes twenty-five songs on its weekly survey over the years, and every New Year’s Eve would count down the top 89 hits of the year, to coincide with its number on the dial.

Billboard magazine, just as it does now, maintained a nationwide weekly ranking based on sales and surveys. Unlike now, there were only three main music categories to speak of: Country and Western, Rhythm and Blues (R&B), and Popular (Pop). The Pop charts were considered the barometer of the nation’s tastes, and the goal of most artists, regardless of their musical style, was to top that chart, “with a bullet” if possible. With the advent of FM radio and album oriented rock (AOR) in the late 1960s and early 1970s, the previously unchallenged institution of Top 40 became a target of derision for everyone from musical elitists and audiophiles to various proponents of the ‘60s counterculture, and it was often held up as a symbol of everything that was wrong with mainstream society. My main beef was the maddening amount of repetition inherent in such a limited playlist, and when I was thirteen I started listening almost exclusively to what was then an oldies station, WDZ in Decatur, before discovering, and succumbing to, FM.

For all the grief leveled at the phenomenon that was Top 40 radio in its heyday, by the late ‘60s-early ‘70s it nevertheless reflected popular tastes that were capable of simultaneously embracing the likes of Al Green, Johnny Cash, The Temptations, Engelbert Humperdink, Bob Dylan, Glenn Campbell, Bobby Goldsboro, Louis Armstrong, The Rolling Stones, The Jackson Five, Aretha Franklin, Ferrante and Teicher, Isaac Hayes, The Carpenters, Edwin Starr, Tammy Wynette, Neil Diamond, Carole King, Harry Nilsson, Tom Jones, Janis Joplin, Frank Sinatra, Santana, Van Morrison, Joni Mitchell, John Denver, the cast of Jesus Christ Superstar, The Partridge Family, Marvin Gaye, Joan Baez, Perry Como, The Doors, The Osmond Brothers, Led Zeppelin, The Bee Gees, Barbra Streisand, James Taylor, Crosby Stills Nash & Young, Cat Stevens, Diana Ross, Elvis Presley, and The Beatles. Ponder for a moment what all those names could possibly have in common, other than the fact that they all performed some type of music, and you get the point.

It’s safe now to admit that the musical pulse of the American public was being taken from a more culturally diverse sampling under that much-maligned system 40 years ago than any of the myriad current genre-based measuring sticks—bastions of isolationism that they are—manage to do today. In retrospect, the Top 40 of four decades ago could be described not as the whirlpool of homogeneity that AOR hipsters would have us believe at the time, but rather as a fountain of tolerance and heterogeneity. For all of our current penchant for self congratulatory back patting based on the canard of “how far we’ve come,” what do we have today that compares to the original concept of Top 40 as a celebration of, and showcase for, diversity—both musical and cultural? If you think American Top 40 with Ryan Seacrest fits the bill, then you may as well stop reading this right now.

No stranger to Top 40 radio in the late ‘60s/early ‘70s was Sly and the Family Stone, itself a model of diversity—not only in the music which that aggregation created, but also in the physical makeup of the group. It was one of the first racially integrated rock groups (only the Del-Vikings and Booker T. & the MG’s come to mind as precursors), as well as being multi-gender. This thanks to the band’s founder and front man, Sylvester Stewart, a.k.a. Sly Stone, who cut his musical teeth with multi-racial groups as a gospel- and doo-wop-singing youth, later going against the grain by occasionally spinning discs by white artists as a disc jockey for the San Francisco R&B radio station KSOL. 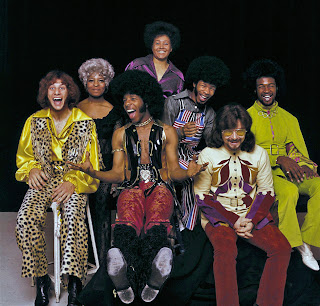 The name itself suggests brotherhood/sisterhood. In addition to the fact that the group was comprised of, in part, Sly’s actual siblings, the implication was that even non-relations, including the two white members, Greg Errico and Jerry Martini (despite Black Panther demands that they be replaced with black musicians) were brothers and sisters as well, part of a utopian family of man. And the music lived up to the name. Hits like “Dance to the Music,” “Stand!,” “I Want to Take You Higher,” “Everyday People” (which popularized the phrase “different strokes for different folks”), “Hot Fun in the Summertime,” and “Everybody Is a Star” perforated racial barriers at a time when race riots were a not infrequent fact of life.

By late 1971, though, after having taken up residence in the LP and singles charts for a solid couple of years, and after sealing their place in the pantheon of rock’s superstars with a knockout performance at Woodstock, Sly and company had not produced an album of new material in nearly two and a half years. This was pop music suicide at the time, hit singles notwithstanding—Sgt. Pepper and FM radio had recently made the LP the standard currency in the business—and their record label, Epic, resorted to the stopgap measures of repackaging their first album and releasing a greatest hits collection.

But it was the all too familiar stumbling blocks of young millionaire rock stars—expanded egos, the abuse of drugs, and the paranoia created by both—that became much more of a threat to the band’s erstwhile utopia, as well as Sly’s increasing lack of dependability (he was showing up late for gigs, and often missing them altogether). It was in this self-inflicted morass that Sly Stone created his masterpiece, a harbinger of things to come in soul, rock, and especially the then-emerging genre of funk.

There’s a Riot Goin’ On is a rich, dark, brooding, sometimes ominous, sometimes humorous amalgam of thickly layered grooves and churning urban rhythms that is unlike anything the generally upbeat Family Stone had created up to that point. Reflecting the struggles of the listing civil rights movement and the ongoing plight of African Americans in a white society, it was the perfect mirror to the troubling times that bore it, yet, like all great art, it is timeless—as listenable today as it was in the sociopolitical crucible that was 1971.

John Lennon once told Rolling Stone editor Jann Wenner, “The blues is a chair, not a design for a chair or a better chair . . . it is the first chair. It is a chair for sitting on, not for looking at. You sit on that music. [The Beatles created] our version of the chair.” As Elvis did while recording with Sam Phillips at Sun Studio, as the Beatles did while performing in clubs in Hamburg and in the Cavern Club in Liverpool, and later while recording at Abbey Road, it’s no exaggeration to say that Sly, in There’s a Riot Goin’ On, fashioned another version of that chair. It integrates elements of blues, gospel, jazz, country & western, soul, and rock, and builds a new chair from the ground up. Listen, and in it you can hear what was to come, the fruits of Sly's labors: George Clinton and Parliament/Funkadelic, the Ohio Players, Michael Jackson, the Black Eyed Peas, the screams and howls Prince would commandeer for 1999, riffs and vocal flourishes the Stones would co-opt for their 1972 masterwork, Exile on Main St.

While There’s a Riot Goin’ On is now considered a classic album, and a paradigm-shifting one at that—when discussing R&B, there’s before Riot and there’s after Riot—the initial critical reception was mixed. Rolling Stone reviewed it favorably, and The Village Voice’s Robert Christgau lauded it “an organically conceived masterpiece . . . whose whole actually does exceed the sum of its parts,” while Los Angeles Times critic Robert Hilburn didn’t quite know what to make of Sly’s dark, new direction. Greil Marcus, in an otherwise astute overview a few years later, stooped so low as to call it Muzak—albeit “with its finger on the trigger.”

Riot debuted at #1 on Billboard’s album charts upon its release in November 1971 (and spawned two Top 40 singles, including the chart-topping “Family Affair”), but it would mark the beginning of the end for Sly and the Family Stone, as most original members of the group had already departed (it was mainly Sly who laid down the tracks, with the assistance of Billy Preston, Ike Turner, and Bobby Womack, on Riot) and Sly himself slipped further into the darkness of drug abuse.

In an interview with the webmaster of the official S&TFS website, Stone explained Riot’s cover art, a red, white, and black version of the American flag, with suns replacing stars: “I wanted the flag to truly represent people of all colors. I wanted the color black because it is the absence of color. I wanted the color white because it is the combination of all colors. And I wanted the color red because it represents the one thing that all people have in common: blood. I wanted suns instead of stars because stars to me imply searching, like you search for your star. And there are already too many stars in this world. But the sun, that's something that is always there, looking right at you. Betsy Ross did the best she could with what she had. I thought I could do better.”

That could almost serve as an epitaph for the tumultuous, violent, ultimately divisive 1960s, whose end Riot heralded. The civil rights movement, the youth culture, the New Left, the doves, all wanted to do better, thought they could do better, than those who went before them . . . to create a utopia, to make a better chair. But the culture ended up splintering, and its methods, if not its actions, alienated even more than before those who supported the status quo, with still-open wounds on both sides continuing to fester to this day.

The Top 40 as we knew it wasn’t long for this world, yet, ironically, it’s the music that survives.