That You May See the Meaning of Within: Deconstructing Revolver 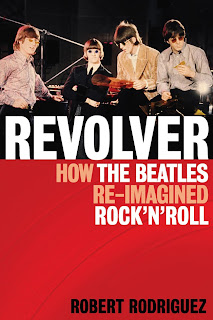 At the end of “Lady Lazarus,” an episode from the fifth season of the superb cable TV period drama Mad Men, set in the 1960s world of Madison Avenue, ad man Don Draper is urged by his wife to listen to a specific track on the new Beatles album she’s just purchased. After she leaves their chic Manhattan apartment to attend her evening acting class, Don places the LP on the hi-fi turntable, drops the tone arm onto the last track, and lies back in his Danish lounge chair as the distinctively unconventional sounds of “Tomorrow Never Knows” fill the room. Before making it halfway through the song, he abruptly jerks the stylus across the grooves and off of the record and walks silently out of the room, apparently having had enough.

Small wonder, as this positively avant-garde recording must have sounded bizarrely foreign to the ears of anyone over the age of 30 in 1966, let alone 40, the age of the Draper character at the time (his wife, Megan, was in her twenties). Nevertheless, after a few moments of silence, the Mad Men credits roll and the song picks up where it left off on the soundtrack. The already rapidly changing world of the 1960s will move forward at an even faster pace than before, with or without the Don Drapers who inhabit it.

“Tomorrow Never Knows” is the most adventurous and experimental composition on an album filled with envelope-pushing music that has proven over time—more so than Sgt. Pepper’s Lonely Hearts Club Band, as will be discussed—to be the creative apex of the Beatles’ career: Revolver. It took a while for the virtues of this inspired work to come into worldwide focus, mainly due to the fact that the U.S. issue, as was the case with all of the group’s albums up to that point, had been truncated prior to its release (three of its John Lennon-penned songs were preemptively lifted for placement on the patched-together “Yesterday”. . . and Today), thus preventing Stateside fans and critics alike from hearing the LP as it was intended, in many cases until the band’s catalogue was initially released to CD in 1987.

Following the magnificent, atmospheric Rubber Soul, Revolver—by turns edgy, poignant, lovely, whimsical, gritty, challenging, and always dynamic—completed the most overwhelming one-two punch of any musical artist of the rock era. Both have stood the test of time, sounding as fresh and inspired nearly 50 years later as when they were first released. Revolver, while maintaining the universal listenability* that had become a Beatles trademark, raised the stakes artistically for all of rock music like no album before or since.

* For the most part; as the Beatles ventured into uncharted musical territory they were a little apprehensive that some fans might not follow.

The three composing Beatles were firing on all cylinders. Lennon’s contributions were more richly compelling and cumulatively potent than on any other album. Paul McCartney broke new ground with deeply poignant lyrics (particularly with “Eleanor Rigby”) and more elaborate melodies than on any of his previous compositions, transcending his already well developed pop music sensibilities. George Harrison reached a new level and a personal best, not only contributing three numbers to a Beatles album for the first time, but even the one chosen to lead off the LP (the acerbic, funky “Taxman”)—despite the heavy competition for disc space from Lennon & McCartney at their peak. 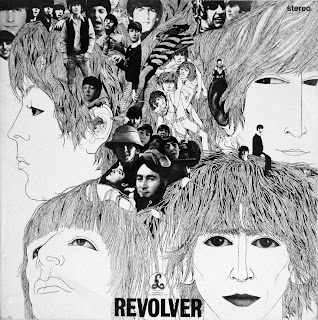 The iconic cover art for Revolver was created by Beatle buddy Klaus Voormann.

Millions of words have probably been written about the Beatles over the years, possibly hundreds of thousands about Revolver, so I’m not going to even attempt to critique this masterpiece. Since I’ve practically grown up with it, I’m too close to it, and therefore incapable of doing it justice. Not only has Beatles authority Robert Rodriguez done just that, he has also placed the landmark album within the perspectives of both its own time and ours, while collecting all that is known of what went down in the actual recording sessions, in Revolver: How the Beatles Reimagined Rock ‘n’ Roll.

In this very absorbing book, Rodriguez points out as a likely reason why Revolver was overlooked for several years as a “best rock album ever” candidate (besides the previously mentioned butchering of its contents by Capitol Records in the U.S.) the fact that it was released in a year in which the rock world was bursting with unprecedented vision and imagination. Bob Dylan’s Blonde on Blonde, the Rolling Stones’ Aftermath, and the Beach Boys’ game-changing Pet Sounds all came out a few months before Revolver, plus the rise to prominence of the Byrds, the Who, the Lovin’ Spoonful, and the Yardbirds, all contributed to the Beatles’ sole LP release of the year getting somewhat lost in the shuffle. By contrast, the darling of critics since its inception, Sgt. Pepper (it was, to that time, the most anticipated rock album ever), went unchallenged in 1967 by the likes of Dylan, who was recovering from a motorcycle accident, the Beach Boys’ Brian Wilson, who had aborted that group’s would-be masterwork, Smile, and the Stones, who were facing jail time, and who by year’s end could come up with nothing more than a blatant imitation of Pepper, the LP Their Satanic Majesties Request.

Rodriguez also maintains that, whereas Revolver’s technical innovations came about as a means to fulfill the needs of the Beatles’ burgeoning creative vision (assisted by trusted producer George Martin and young engineer Geoff Emerick, an inventive newcomer), a case of necessity being the mother of invention, with Pepper those innovations were virtually treated as an end unto themselves, serving more as a slick veneer that disguised relatively lightweight material (with the exception of the worthy and formidable tour de force “A Day in the Life”). He suggests, and it’s hard to disagree, that that album would have benefitted immeasurably had the songs from the Beatles’ February 1967 single, “Strawberry Fields Forever”/“Penny Lane” been included, mentioning that Martin considered his not doing so “the biggest mistake of my professional life.”

Personally, from my very first listen as a teen, I’ve never felt the connection with Pepper that near-universal critical gushing led me to believe I should have. In recent years, as I’ve gained more historical perspective and knowledge of a wider variety of musical forms and their history, I’ve found myself in agreement with those who view the album more as a collection of psychedelicized treatments of ballads,  melodramatic storytelling, TV commercials, and traditional English music hall entertainment (the British equivalent of vaudeville), of which Paul’s father was a veteran. By contrast, once a British Parlophone copy of Revolver found its way into my hands, also when I was in my teens, I became permanently and indelibly hooked on it, a state that has intensified over the years. Basically, Revolver is a great rock album, while Pepper is a fascinating, if not quite so great as initially perceived (perhaps through a haze of mind altering hallucinogens in some cases—just sayin’), pop album, a curio from the Summer of Love that holds more weight with unwittingly nostalgic older music critics than was actually ever there . . . in my opinion, anyway.

That said, I still bristle a little every time I watch Richard Manuel as he lambastes the flowery, psychedelic lyrics and altered mindset of the music (read: Sgt. Pepper) that immediately preceded Music from Big Pink—the Band’s first LP release—in Martin Scorsese’s excellent rockumentary-concert film of the Band’s swan song, The Last Waltz. For all of its arguable faults, with Pepper the Beatles were still attempting to creatively stretch the boundaries of the genre, while the Band—as good as they were—simply reinterpreted the musical forms that initially inspired rock ‘n’ roll: blues, folk, and gospel. Not that there’s anything wrong with that. There’s room for both psychedelic and roots music in rock, and much more; it’s a very democratic form of expression. My only argument is that Revolver was a much more formidable and durable work than Pepper, and is more deserving of the title “Greatest Rock Album Ever,” to the extent that such a title can or should be placed on any album. 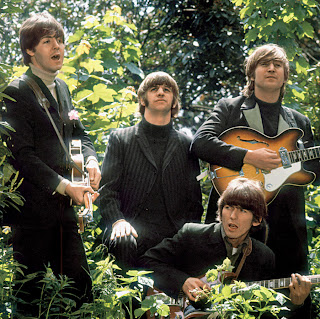 The Beatles on the grounds of Chiswick House during the shooting of promo
films for “Paperback Writer” and “Rain,” May 20, 1966.

In his book, Rodriguez further suggests that the Beatles’ creative output, and their position as a force poised on rock’s cutting edge, precipitously declined after Pepper (though, as stated, it had come to full fruition with Revolver). As an avowed Beatlemaniac I hate to admit it, but I have to agree. Though their remaining releases were artful and/or listenable at worst (Magical Mystery Tour, Let it Be), and brilliant and classic at best (“The White Album,” Abbey Road), they broke no new ground creatively, much of which likely had to do with the fact that, post-Pepper, the individuals within the group began to serve as backing musicians for each other’s compositions rather than collectively functioning as a unified whole. Again, there’s no shame in making “merely” very good music; it’s just that the Beatles were no longer providing “an early clue to the new direction.”

Besides arguing in favor of what he feels is Revolver’s deserved position at the top of the list of rock’s elite LPs, evaluating each of its songs individually (including the single that emerged from the album’s sessions, “Paperback Writer”/“Rain”), providing mono-to-stereo mix comparisons and pointing out their variations, and summarizing session notes and technical challenges as well as details remembered by those involved in the production, Rodriguez effectively transports the reader back to the era and the musical environment that was the crucible in which the album was created. Practically everything that was happening in the pop/rock world leading up to and following the recording and release of Revolver is discussed, including the astute observation that, with perfect timing, the Monkees were concocted at the exact moment in which the Beatles abandoned touring (and with it their perceived mop top image) in favor of the recording studio exclusively, thereby filling that void and providing continued fodder for teen gossip magazines, which as a result never missed a beat.

Revolver: How the Beatles Reimagined Rock ‘n’ Roll isn’t necessarily for everyone, but I obviously found it an engaging read, one that not only reignited my longstanding but recently dormant interest in the Beatles in general and Revolver in particular, but also piqued my curiosity in things historical. And I learned a lot.