One For the Ages - The Forgotten Virtues of Going My Way 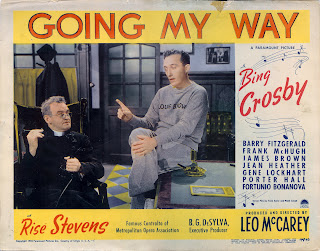 Some movies are simply beyond criticism. Despite having been written off in recent years by many mainstream critics – with much repeated, off-base allegations of over-sentimentality – this is one of them. It belongs in the pantheon of truly great films. The cynicism of the world we live in today no doubt prevents countless viewers (and critics) from looking beneath the placid surface of Going My Way, but it's definitely worth the effort.

Part of this reluctance to delve may be due to the film's pastoral ambience and relaxed pace, which could have easily inspired the creators of The Andy Griffith Show a few years later  (check out the checker game scene). It takes its time, telling its story on its own terms, and this simply doesn't sit well with the majority of modern multi-taskers who've been fed a steady diet of breakneck CGI action orgies, sophomoric sex comedies, and formulaic, artificial romcoms. But if you give it a chance and let it work its charms it will eventually win you over. To borrow a line from the film, it will grow on you. Maybe not in the first viewing, maybe not even in the first couple... but eventually.

Its charms worked instantly on audiences in need of hope, inspiration, and a chuckle or two during the Second World War, making it a huge box office hit in the year of its release, 1944. It even won over critics of the day. James Agee stated that Going My Way "points the way to the great films which will be possible when Hollywood becomes aware of the richness and delight of human character for its own sake." It earned seven Academy Awards, including Best Picture, Best Director (Leo McCarey) and a Best Actor Oscar for Bing Crosby (as Father Chuck O'Malley), who was just starting a run as the #1 box office star for a record five consecutive years. 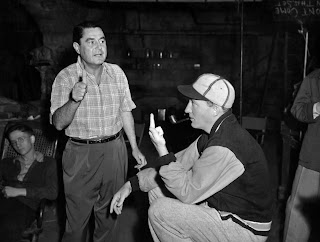 Leo McCarey and Bing Crosby on the set of Going My Way.

Not quite a comedy, not quite a drama, this slice-of-life tapestry gently sets an example of all generations helping one another, ultimately working together as one extended family. It's basically an enactment of how one person can make a difference by helping his or her neighbor – an important message in any era, but especially in the war-ravaged one into which this film was released. That helpful, caring attitude is infectious to the point that disparate members of an urban neighborhood eventually come together as a community.

The twist is in Father O'Malley's appealingly relaxed methods, which appear unorthodox to the staid, older, by-the-book Father Fitzgibbon, providing the conflict of the main plot line. Fitzgibbon (Barry Fitzgerald, Best Supporting Actor Oscar winner) has been the pastor of St. Dominic's Parish for forty-five years, and as the neighborhood around him has changed, his old school ways have become less effective. Gangs of unsupervised boys roam the streets getting into trouble (a real-life consequence of fathers fighting overseas and mothers working in war production plants during WWII), and the church is deeply in debt and about to be foreclosed on. The financial state of the church reflects the spiritually bankrupt community around it, and the physical structure itself will ultimately undergo a literal baptism by fire in order to be born again. In the meantime, young Father O'Malley is sent by the bishop to put things right, basically being assigned to take over for Fitzgibbon without letting the old man know it.

After assuming he's no longer needed, and having left in despair (only to be summarily returned by the local beat cop), the contrite Fitzgibbon eventually comes to understand and embrace O'Malley and his methods, and puts complete faith in the younger man. It all comes together in a delightfully subdued, justly celebrated scene in which the two men bond over a "wee drop of the creature," as Bing endearingly intones a couple of choruses of "Too-Ra-Loo-Ra-Loo-Ral" while sitting at the convalescing Fitzgibbon's bedside. Whoever came up with the term "screen chemistry" must have had something like this scene in mind.

Sooner or later, nearly everyone in the film gives of themselves: young Ted Haines, the son of the banker who's foreclosing on the church, leaves his father's line of work to volunteer for military service; an opera star (Risë Stevens) auditions a Father O'Malley-penned song for a music publisher, the royalties of which it is hoped will raise badly needed funds for St. Dominic's; the members of a street gang provide their (previously unrealized) singing talents for the (also previously unrealized) church choir; even the greedy banker (Gene Lockhart) forgives the church its mortgage. All the giving is sparked by the efforts and example of O'Malley, whose ultimate gift is saved for a no-dry-eye-in-the-house ending, just before he leaves for another parish he's been called on to save.

Sentimental? Certainly. But every iota of moisture in every teardrop is earned, and one doesn't feel foolish for blubbering like a fool.

That's partly due to the effortlessly smooth, confident persona Crosby projects in an immaculate performance, the perfect counterweight to the story's inherent sentiment. Bing's acting has sometimes been dismissed as that of someone merely playing himself (this having even been perpetuated by the self-effacing Crosby), and his Oscar win has been attributed to the fact that much of the crop of top `40s actors was away in military service (though he was up against the likes of nominees Cary Grant and Charles Boyer). But just watch him – he carries the picture, despite sharing scenes with a couple of the best scene-stealers in the business, Frank McHugh and especially Abbey Theatre alum Fitzgerald. Crosby's acting style appears modern in an era of now-antiquated theatrics. We look across the years at him and he seems familiar, contemporary. 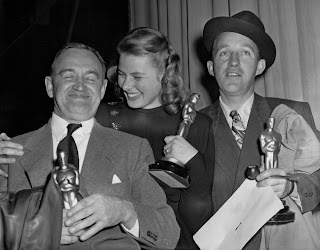 1944 Oscar winners Fitzgerald, Ingrid Bergman and Crosby. Bing would co-star with Bergman in the sequel to GMW, The Bells of St. Mary's, in 1945.

He handles the role of a priest convincingly – a daunting task for the best of actors in any era – and almost casually, without the slightest hint of stiffness or self-consciousness. There is no trace of the sanctimoniousness that frequently crept into Spencer Tracy's performances in the Boys Town films, or Pat O'Brien's in Angels With Dirty Faces. Crosby's priest comes across as a likeable guy, yet one who's just tough enough to deal with whatever situation is at hand – without having to use his fists. Perhaps the greatest tribute to his achievement is that young men in the 1940s and ‘50s actually joined the priesthood because of their having been inspired by the Father O'Malley of Going My Way and its sequel, The Bells of St. Mary's.

Going My Way's writer-director Leo McCarey probably summed up his film best when he stated his storytelling philosophy: “I love when people laugh. I love when they cry, I like a story to say something, and I hope the audience feels happier leaving the theatre than when it came in.”

From where I'm sitting, Going My Way succeeds on all counts. If it doesn't for you, give it a chance. It just may grow on you.